I am a published writer, musician, developer, and a designer (of sorts)...

I live in Tallahassee, Fl. and am a 6th Generation Native Floridian.

I have a Bacon number of 3, and, most recently, procured the Individual Nobile Title of Lord Brian K Vagnini of the Principality of Sealand. (bowing/curtseying is welcomed and appreciated, but not required...)

I became an Ordained Minister through the Universal Life Church. Let me know if you want me to marry you. 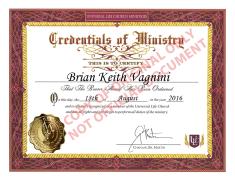 I fluctuate between being an ESTJ and ENTJ.

I am related to both the infamous Jesse James and also have a relative that was in the Revolutionary War, under General George Washington.